Gather ‘round, kids, and I shall tell you the tale of the PyroBot. Don’t worry, this book has pictures and the sentences are short. (Well, shorter, anyway. By the fifth revision, I remembered that verbosity is part of my charm – which is code for “F it, I am what I am.”)

Once upon a time (6 years ago on this day, to be precise), there was a skater named Pyro. In 10 blissful months with ACRD she’d skated off 60 pounds, become co-captain of her hometeam and was finally starting to feel like a productive member of her travel team. She still had a long way to go, but basically, everything was coming up Milhouse. 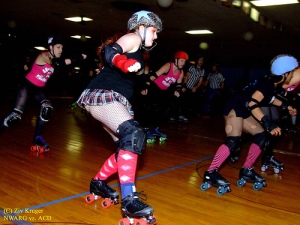 I’m either calling off the jam or doing the Funky Chicken. Hard to say.

Our hapless (but never helpless) heroine was jamming at practice when a low block shattered her left tibia/fibula in 11 places. She kept a brave face as they waited for the EMTs, reassuring teammates that she was doing just dandy (“I’m not in shock, I’m just pissed off!”) and cracking dirty jokes until the ambulance doors closed. Then the tears started. In that moment she realized she was going to miss more than just next week’s bout, and the reality of that hurt even more than the floppy leg.

Crash! There goes reality and PBR all over the floor.

Five looooong (seriously LONG) days later, Pyro became PyroBot. Dr. Clinton Bell did an impressive job of reassembling her, installing 2 plates, 17 screws and a stabilizing rod. He also did a great job of being cute as a button.

Metal detectors and MRI tubes are my sworn enemies.

Pyro spent the first month in a wheelchair. There wasn’t much to do in her wheelchair besides drink. So Pyro drank a lot.

It’s hard to tell if you’ve had too much to drink if you don’t have to walk a straight line.

Pyro’s entire life kind of imploded at this point, but she was lucky to have the support and love of good friends who were there for her through some rough patches.

Eileen Left’s other arm is in a sling, but she still pushed me around all night.

After another three months on crutches and a final month in a walking boot, Pyro was finally cleared for physical therapy. She was told she’d probably always walk with a limp and that she would never skate the same way she used to. 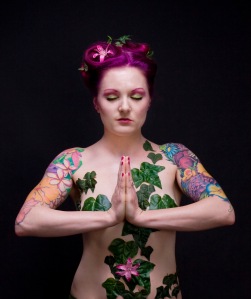 Outfit not recommended for bikram yoga.

Yoga restored her balance in every sense of the word. Her flexibility and strength returned. She became braver, calmer, and happier. She drank less. She smiled more. She laced up her skates when she was cleared, but pain and fear kept her from contact for 4 months. She didn’t want to quit, though. She became PyRef. 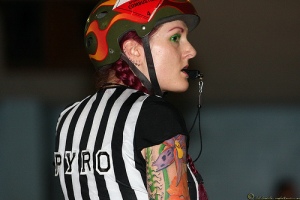 And she track managed for awesome teams. 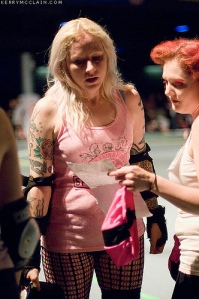 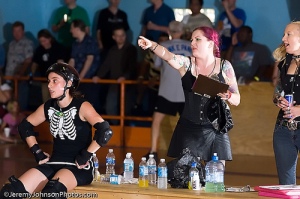 Oops, I’m trying to ref instead of coaching.

Then a funny thing happened – the fear faded and the pain became easier to tune out. Pyro started bumping skaters at practice instead of blowing her whistle. She skated for travel team again, soon becoming co-captain and eventually captain. She joined a hometeam – an amazing group who challenged her to work harder and become a better skater than she ever was before the injury. She even played co-ed derby, which she LOVED. 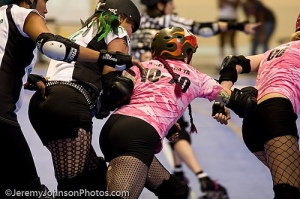 Pyro soon began to run again, and the last of that limp disappeared – along with the last of her drinking days. She entered as many 5Ks as she could, then set her sights higher. Pyro never ran farther than 8 miles at once before her injury, but after becoming Pyrobot she ran 2 half-marathons and a 15K within 4 months. Once she was able to use her legs again the way they were meant to be used, she never wanted to stop.

Spending so much time with physical therapists inspired Pyro to hire a personal trainer – then eventually become a trainer herself. She focused on corrective and rehabilitative exercise so she could help her friends heal from their injuries, too. She discovered that muscle not only provided a protective layer to help prevent injuries – it looked damn good too. 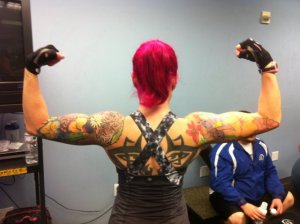 And that, my darlings, is how a girl who thought her world was ending turned it around into something far better than she could’ve ever imagined. It took time and hard work and it hurt a lot. But she came out on the other side stronger, wiser and with the understanding that every challenge is just an opportunity to prove her mettle. Now her mission is to help others see that no matter what they are going through, this too shall pass and life will be amazing again. It won’t happen overnight and you’ll have to work to make it happen, but it will happen.